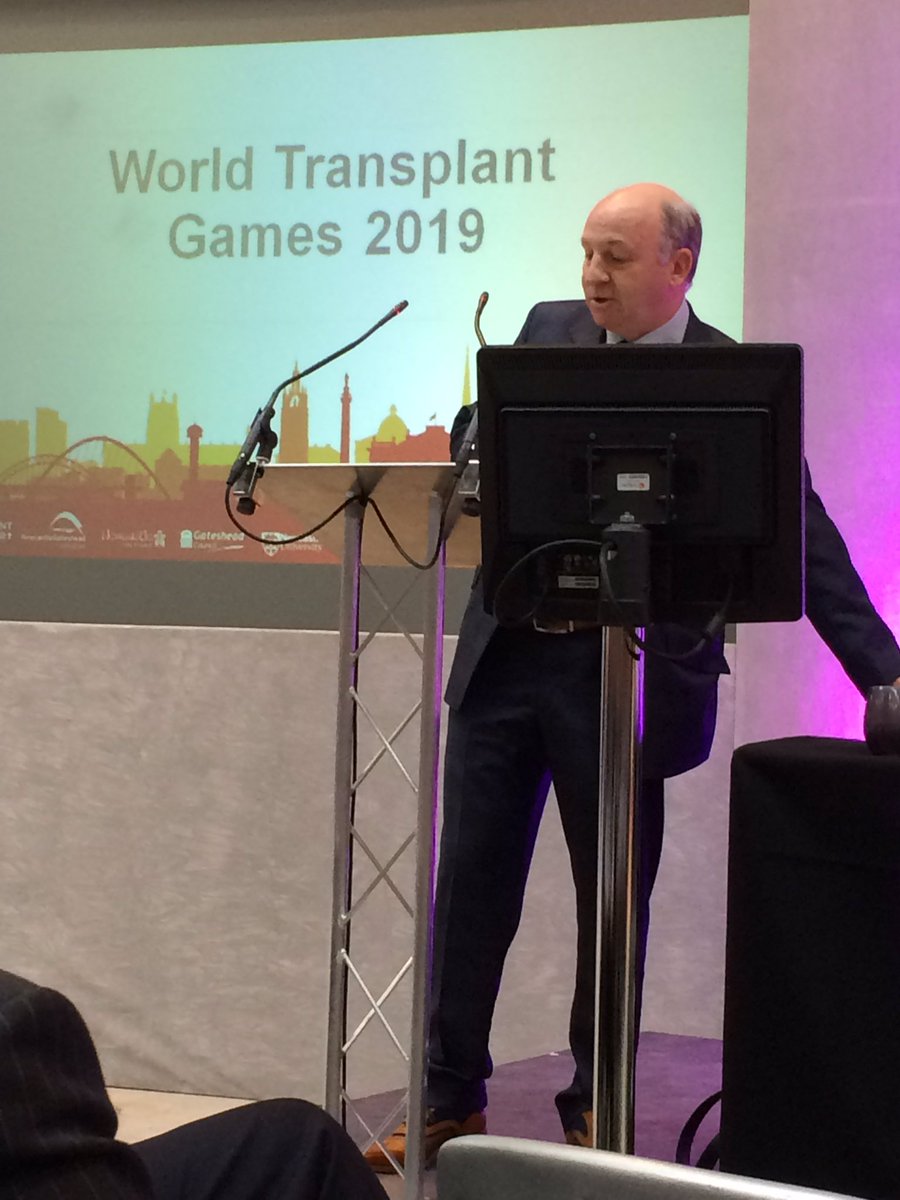 For those of you who don’t know me, my name is Graham Wylie and I was fortunate enough to be asked to be Chairman of the World Transplant Games which is coming to Newcastle/Gateshead in 2019.

Here is my email address – if anyone wants to contact me then please feel free to do so graham.wylie@closehouse.co.uk

I’m here to talk about the importance of The World Transplant Games – what they are about and why it is important to have them here in the region.

It is difficult to imagine the apprehension patients must feel when they are told that only an organ transplant can save their lives.

It is not only the physical process they must come to terms with but also the psychological impact of having an organ removed from their body and an organ from someone else’s body replace it.

Every transplant is a journey of hope.

Every transplant recipient has a story of dark days and tortured nights.

The agony of waiting.

But they also have inspirational tales of life and hope.

Tales of being reborn and appreciating every moment of every day.

We are fortunate that we live at a time when transplantation has become a relatively safe and routine operation.

However, it is not just about the skill of the doctors and nursing staff who perform the procedure, albeit that this is incredible, but it is very much about the fact that, at a time of unimaginable grief, people are able to make the decision to donate their loved one’s organs to another person, a stranger, someone they may never know.

It is the ultimate altruistic act.

Unfortunately, there are not enough of them and that is what the Transplant Games are all about.

Raising the awareness of the Organ Donor Register – not just here in the UK but also around the world.

300 people just in Newcastle waiting for an organ transplant.

and during last year over 400 people died whilst on the waiting list.

Over 500,000 people died in the UK last year but only 6,000 died in circumstances where they could be a donor.

However, only a minority were on the donor register.

And of those on the Donor Register, 70% of the families refused to let their organs be donated.

And you can imagine how big the numbers are worldwide.

Staggering numbers and an issue that needs to be addressed to enable all these people to have a second chance of life.

And so there is a huge education programme going on and the Transplant Games are a fun and very visible way to get the message across.

People who have been given a second chance of life and are celebrating it by showing how active they are.

How did I end up being Chairman of the World Transplant Games.

Well, it really was a very easy decision.

I have four children and two grandchildren.

But just over 7 years ago one of my twin daughters, even before she was born, was diagnosed with a serious heart problem.

At the 20 week scan, my wife and I were told that “twin number two” was going to be born with a faulty heart.

She had three things wrong with her heart ….

First, she had no pulmonary artery.

Second, she had a massive hole in her heart and

Thirdly, the arteries taking the blood from her lungs back to her heart were going to the wrong side.

She needed major surgery as soon as she was born.

My wife was told to stay pregnant for as long as she could because the bigger the baby the more chance she stood of surviving the operation.

It is a good news story.

Kiera was born on the 1st December 2009 and had open heart surgery two days later.

She also had two further open heart surgery operations at six months old and just after her second birthday.

She is now a very active and lively six year old, going on seven next month, and if it wasn’t for the scar on her chest you would not know she was a heart patient.

And while I was spending so much time at the Freeman Hospital, I met many other patients and families and some of them had gone through not just major surgery but also a heart transplant.

So when I was asked to be chairman of the British Transplant Games that were coming to Newcastle/Gateshead in 2015 it was a no brainer.

It was the least I could do for saving my daughter’s life.

Well, first of all, you can only compete if you have had a transplant

Hopefully, there are not many of us with one of these conditions here today but you probably know of someone who has had a transplant.

It is not just for the athletic among them.

There are a range of sports as well as athletics and swimming …..

And for the more leisurely….

And competitors range from the age of 4 to 84.

And we have facilities all over the region to handle all these sports.

NGI and the three councils Gateshead, Newcastle and Sunderland have done a brilliant job arranging venues such as ..

And my favourite venue, but I am a bit biased.

Close House for the golf

So as you can hear, some very varied sports at some superb venues for people of all ages.

Now, we had a very successful British Transplant Games here in Newcastle/Gateshead in August last year.

More than 850 Transplant Athletes and 2,500 of their families and supporters came together for a four day celebration of sport.

Powered by the gift of life.

Probably the most successful games they have ever had thanks to the generosity of all of our sponsors, the professionalism of the organisers and venues – particularly Sarah Stewart and her team at NGI- and the fantastic support of the people in the region who made everyone very welcome.

The atmosphere across the four days was electric.

The Opening Ceremony embodied the spirit of the Games and Joe McElderry had a packed City Hall on it’s feet singing the very appropriately named song – Don’t Stop Believing.

All the competitors were in great spirits and there were some great moments from the games …..

A little four year old boy who had had a kidney transplant and had to use a walking frame to compete in the 25 metre run. Halfway through his short race he dispensed with the walking frame and ran the last ten metres to the amazement of his Mum and Dad.

Huge applause and not a dry eye in the house.

Secondly, I asked a good friend of mine, Jeremy Kyle to come and present the prizes at the Gala Dinner at the end of the games.

It worked well and he had everyone in stitches especially when he thought the Lord Mayor of Newcastle was a competitor and he asked him what he had won to get the gold “chain of office” around his neck.

Jeremy was so impressed by the enthusiasm and commitment of the competitors that he went and signed on for the Organ Donor Register the following morning.

So all in all, a great event.

And lots of fun.

And managed to get another 20,000 people to sign the Donor Register as a result of it.

In fact, so well done that we were asked to bid for the World Transplant Games to be held in 2019.

Once again, Sarah Stewart and her team stepped up to the mark and did a brilliant job developing and securing the bid.

Building the partnerships with the local councils, the universities and the hospitals.

Arranging the visit by the World Federation Committee

And preparing the presentation that Sarah and I delivered to the committee in probably one of the smallest meetings rooms Heathrow Airport had to offer.

You know by now that we were successful but it was quite a surreal experience.

It had been whittled down to just two cities.

Ourselves and Houston in Texas.

Houston sent across a five man professional bidding team from their city council who boasted that they had never been beaten in any bid that they entered.

They had flown across and were presenting on July 4th – American Independence Day.

The signs looked ominous for us.

But we had prepared well and had the success of the British Games uppermost in the committee’s minds and thankfully were selected above Houston.

We were all in the room – packed like sardines – when the winner was announced and the Houston delegation could not believe it. Their mouths literally fell open.

We then all, including the Amercians, had to go for dinner that night to celebrate

The World Transplant Games are coming to Newcastle/Gateshead in August 2019 and we would love you to get involved and make this the most successful and memorable event they have ever staged.

It is important for the region that this is a huge success.

Newcastle is known as the “Spiritual Home of Transplantation”

The Freeman Hospital has performed …

Here is an interesting fact – there are only two hospitals in the U.K. that perform children’s heart transplants. Great Ormond Street and our very own Freeman Hospital.

We should be very proud that they are in our region.

And so, as well as hosting the games, we are also going to host a major conference on transplantation and physical health and sport. There will be speakers and delegates coming from all over the world to the region and cementing our reputation as a world leading authority on this subject.

It is going to be a fantastic week for the region and we are currently formulating our ideas on how people and businesses can get involved and make it a success.

This will range from simple things like volunteering and attendance , entering the Donor run, helping with support in kind, providing financial help to purchase things like medals, helping to raise money to cover the costs of some of the social events through to sponsoring some of the events themselves.

If you want to get involved simply speak to either myself or Sarah and we will be in touch once we have details on how you can help.

I am going to leave you with one interesting story that was published a few years ago.

One of the richest and most powerful men in Brazil, Thane Chiquinho Scarpa, made waves when he announced plans to bury his million-dollar Bentley so he could drive around the afterlife in style. He received lots of media attention and was criticized for the extravagant gesture. Why wouldn’t he donate the car to charity? How out of touch with reality is this guy? He still went ahead with the ceremony.
But, there’s a twist.
Moments before lowering the car in the ground he revealed his genuine motive: To create awareness for organ donation.
“People condemn me because I wanted to bury a million dollar Bentley, in fact most people bury something a lot more valuable than my car,” Scarpa said during a speech at the ceremony. “They bury hearts, livers, lungs, eyes, kidneys. This is absurd. So many people waiting for a transplant and you will bury your healthy organs that will save so many lives.”

We are confident we can deliver a truly memorable event that not only champions Transplant Sport but also celebrates the truly unique and special competitors who are an inspiration to all of us.

We have the venues

The passion and commitment to inspire a generation.

Thank you for listening.