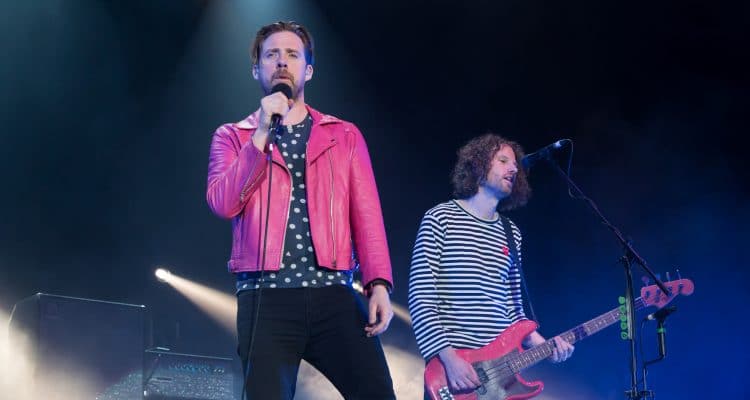 The annual Great North Run weekend in Newcastle ushered in a brand new event to its calendar this year, with the inaugural Run Rock N Raise concert at the Metro Radio Arena.

The charity concert aims to raise funds for the Graham Wylie Foundation, the Teenage Cancer Trust, and Nordoff Robins. Many of the attendees at the event have ran in the Great North Run today including several members of the headline artist, the Kaiser Chiefs.

Tonight the Kaiser Chiefs open their set with one of three new songs included in the show “We Stay Together”. The band also give the audience a taste of what is to come from their sixth studio album with “Parachute” and current single “Hole In My Soul”.

Keyboard player Peanut proudly displays his Great North Run medal, having completed the race in a highly commendable time of around 1 hr 34 mins. Despite much encouragement from Wilson to throw his medal into the audience, Peanut firmly keeps ahold of it.

Tonight’s set is a greatest-hits set, with particular emphasis on the first two Kaiser Chiefs albums, Employment and Yours Truly, Angry Mob. During the second half of their set, the band wheels out all of their big guns. The audience hangs on every word of the likes of the anthemic “Ruby”, “I Predict A Riot”, and “Angry Mob”. Frontman Ricky Wilson orchestrates the audience throughout the show, commanding the stage.

The band closes out their set with a sublime cover of The Who’s “Pinball Wizard” and the melodic “Coming Home” from their last album, Education, Education & War, which comes complete with confetti being projected into the audience. The Kaiser Chiefs bring Run Rock N Raise to a close with “Misery Company” and their classic hit “Oh My God”.

On the strength of the Kaiser Chief’s new material performed this evening, we look forward to more of what is to come from the band when they release their new album Stay Together on 7th October. The band will also be undertaking a headline UK arena tour which kicks off in February, although at present a return date in North East of England is not currently on the cards.